It’s that time of the year again. Yup, WWDC 2010’s keynote has just started as I’m typing this blog post while following it at gdgt (photos posted courtesy of gdgt too!)

The beginning of the keynote was nothing too spectacular since all we wanted was the details of the new iPhone. However, there were some interesting statistics and points that was shared by Steve.

Firstly, there was quite a fair bit of focus on the iPad. We all know that over 2 million iPads have been sold so far. Steve went on to share that there’s now over 8,500 native iPad apps. Impressive numbers considering that the iPad is only officially 2 months old. It seems that I’ve missed out the fact that iBook didn’t support PDFs right from the start and now, you’d be able to read and view on the bookshelf. But here’s a question. Would I be able to upload my own? Or would I still need to use one of those PDF supported readers like Stanza?

Steve went on to talk a little about platforms and the App Store. He reaffirmed HTML 5 supports by mentioning it as one of the 2 supported platform, apart from the obvious AppStore. He also touched upon the rather talked about topic of apps approval. Apparently, 95% of the apps are approved within 7 days. The rest of the 5% are rejected due to the following 3 main reasons:-

And somehow Farmville just HAD to make an appearance. Yup, you read that right. Farmville will be haunting you on the iPhone as well and it comes with push notifications. Bye bye work, hello cabbage. Nevermind that EBay is to generated 1.5 Billion in sales volume in 2010. Nevermind also that 5 Billion apps have been downloaded from the App Store, generating over 1 Billion USD in payout to developers. Yeah. Farmville FTW! *slaps palm on face* 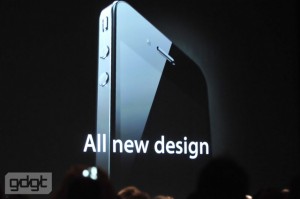 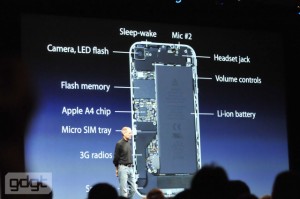 But here’re some interesting relevation. It’s made of glass and stainless steel. And the stainless steel band around the phone doubles as the antenna as well! Rather ingenious I would think. Also, there’s the confirmation of the noise cancelling secondary microphone on top of the iPhone.

Steve also revealed what he calls Retina Display. What it really is is a very high resolution display. 326 pixels per inch to be exact. That’s a 960×640 resolution on a 3.5″ LCD screen. Apparently, our human eye can see up to 300 PPI. Anything more, we won’t be able to detect the pixel. I suppose that’s all just numbers until I see the real thing, but if what we saw on the demo is what we get, that’s one heck of a display! OLED… you’re so yesterday. 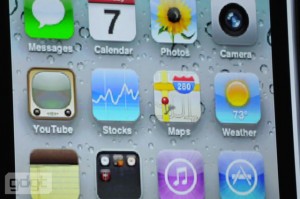 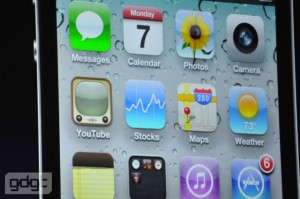 No surprises that the iPhone 4 is powered by the A4 processor just as the iPad. But only up to 32GB storage only. Hmm I suppose that’s enough for iPhone usages since I myself have trouble filling up my 32GB 3GS. But that did surprised me a bit since I’d expect the iPhone 4 to also have a 64GB version.

Oh, and finally, 802.11n WiFi. But here’s a shocker. A 3-axis gyroscope on the iPhone 4 along with the accelerometer! Looks like the iPhone 4 would be getting the WiiMote fix. But here’s thing thing. How does one play a game while flinging the iPhone around and not being able to view the screen? That would be pretty interesting to see. 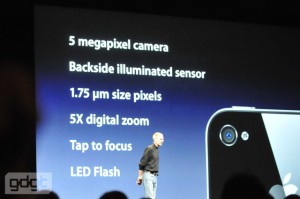 And on the camera front, thankfully Apple didn’t go on the megapixel bandwagon. Who needs 8MP on a camera phone that has such minuscule sensors. The iPhone 4 would be sporting a 5MP with a backside illuminated sensor. Smart. Megapixels means squat on a phone camera. HD video is also supported as expected with 720p recording at 30fps. That’s pretty impressive for a smartphone.

And with HD video recording comes a new app too: iMovie for iPhone! What would happen to apps like ReelDirector then? Oh wait. It’s not a free app and it’ll be selling at $4.99. Duh! But from what I saw on the live feed of the demo, iMovie looks pretty impressive. You would really be able to edit those videos and include soundtracks directly off iTunes from iMovie itself. No need to load up your notebook or desktop for video editing anymore! 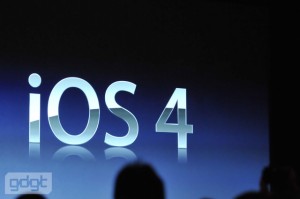 iPhone OS 4.0 gets a new name too: iOS 4! Now it won’t be awkward to say you’re updating the iPad with iPhone OS 4. 🙂 Steve shared that iOS 4 has over 1500 developer APIs with over 100 new user features. Nothing new as this was pretty much what we saw in the OS 4.0 preview.

And as most speculated, Bing will also be added to the Safari search, alongside Google and Yahoo. This would make the other Steve proud. 🙂

We all know that iBook would be coming to the iPhone with iOS 4. Here’s something new. Since iBook supports PDF now, it looks like opening a PDF from any apps would bring up iBook instead of the usual PDF viewer. Interesting. iBook would also sync place, bookmarks and notes across all devices if you run iBook on more that one devices. NICE!

I’m going to skip iAds. Not quite a major interest to me at this point of blogging this. Perhaps later once I’ve seen it myself. 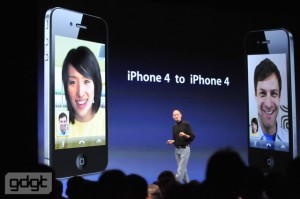 We all know that there’s the front-facing camera on the new iPhone 4 and has speculated 3G video calls to be supported. Instead, it looks like that camera was meant for FaceTime, a video-chat application that works over WiFi! No cellular network required. 100% IP-based. So here I am wondering if it would also support iChat users via the MacBooks too. And here’s the kicker. FaceTime would be made into an open industry standard. That means a whole plethora of 3rd party apps would be supporting FaceTime, crossing platforms to the Andriods, WinMo 7, desktops… you name it! Perhaps even Skype-FaceTime integration! 🙂

A few more bits on the iPhone 4. It would be available on June 24th in 16GB and 32GB, in both white and black. Sames as the iPhone 3GS. It would also be priced at US$199 for the 16GB model and US$299 for the 32GB model from AT&T, with pre-ordering starting at June 15th. No mention of any other network providers unfortunately. And by September, it would be available in 88 countries. Looks like folks like me in Malaysia would have to wait a little longer for it to arrive here while our southern neighbor Singapore gets it in July. *sigh*

As for iOS 4 upgrades for the iPhone 3G, 3GS and iPod Touch, we’ll be getting it on the 21st of June! 2 more weeks to wait! Now I’m excited! 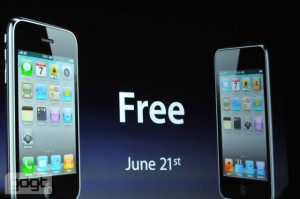 Since I used gdgt’s photos, it’s only fair that I direct you to their site here for the complete coverage of the WWDC keynote!