Everyone knows that the battery on the new MacBooks and iPhone are built-in and non-replaceable. Therefore, it’s extra important to try and maintain the battery to maximize its lifetime.

And since both the MacBooks and iPhones uses a lithium-based battery, there are a few golden rules on how we can keep the batteries in tip-top conditions.

Firstly, lithium-based batteries likes their electrons to keep moving. That way, the battery stays ‘fresh’ throughout its lifetime of use.

So, the myth of keeping it always fully charge isn’t quite true with such devices. If you check out the article here at BatteryUniversity.com, it states the following tip:

The worst condition is keeping a fully charged battery at elevated temperatures, which is the case with running laptop batteries. If used on main power, the battery inside a laptop will only last for 12-18 months. I must hasten to explain that the pack does not die suddenly but begins with reduced run-times.

Also important is to calibrate the battery in your devices. Just to give you an indication, my MacBook Pro now shows remaining time in the regions of 8-10 hours at 90-100% on normal usage.

According to Apple, here’s the guide on how to calibrate the MacBook battery. 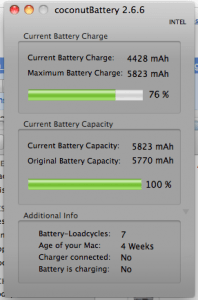 Now, charging it up to full charge is a no-brainer step. To discharge it, you might want to make sure you set the Energy Saver Preference to never sleep and shut down the display. This would ensure that the MacBook continues to drain the battery even if you are not using it. Also, what I did was to run some CPU intensive Flash sites (Flash is such a resource hog) to keep the CPUs running. Otherwise, it would take a lot of hours (really lots) to fully discharge the battery.

If you’re wondering how long it takes to recharge the battery of the 13.3″ MacBook Pro, in my case, it took about 3 hours to fully charge with the MacBook turned off.

And if you maintain your battery well, Apple claims that with the new MacBook Pros, it can retain it’s 80% of its capacity after 1000 charge cycles! If you charge your MacBook once a day, thats about 3 years! Not bad indeed!

As for the iPhone, iPad and iPod devices however, Apple does not specify such a strict regime to calibrate it. Instead, they just advice that we run a full charge cycle once a month. To do that, just fully charge the device, drain it and charge it back up again.

So there you go, start putting in a monthly reminder in your calendar to calibrate your iDevices now.

Tip me with a latte