Hacking a 2TB Mobile HDD for the Intel NUC PC

I recently got myself an Intel NUC to replace my aging Dell desktop that I use as a home server. The NUCs are quite an amazing unit. It has everything within the unit except for RAM and storage. The latest Kaby Lake NUCs comes with a single M.2 NVME slot and a single 2.5″ SATA HDD bay for storage. As I intend to use this to hold media and backups, getting a large capacity SSD would be quite expensive. So the alternative would be to get a smaller 250GB M.2 SSD for the primary OS (operating system) disk and the large capacity 2TB 2.5″ regular mobile HDD for the secondary media storage. 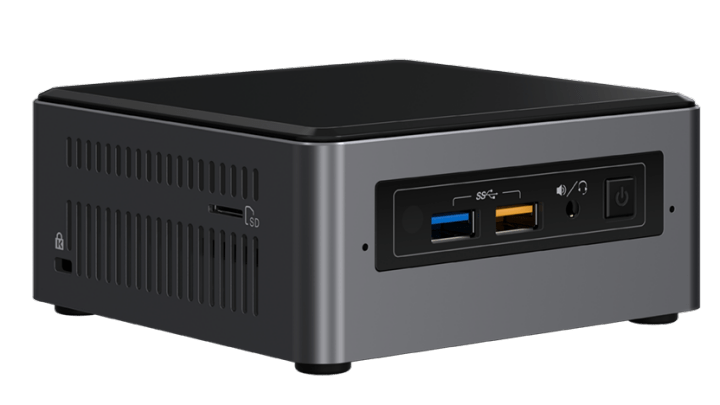 Intel NUC (Next Unit of Computing)

But when I tried looking for availability of 2TB 2.5″ mobile HDDs in Singapore, I just can’t seem to find it anywhere. After asking around, it seems that the hard disk manufacturers has deemed that there is no market demand for such large capacities in this part of Asia and therefore decided not to sell it here. So it seems my only option was to buy it online via Amazon. Then, I remembered there were 2TB external backup HDDs that were in a slim form factor. So I thought that I should just rip out a 2TB mobile HDD for the Intel NUC instead!

Hacking a 2TB Mobile HDD for the Intel NUC PC

The HDD that I was thinking of is the Seagate Backup Plus Slim 2TB Portable External Hard Drive. 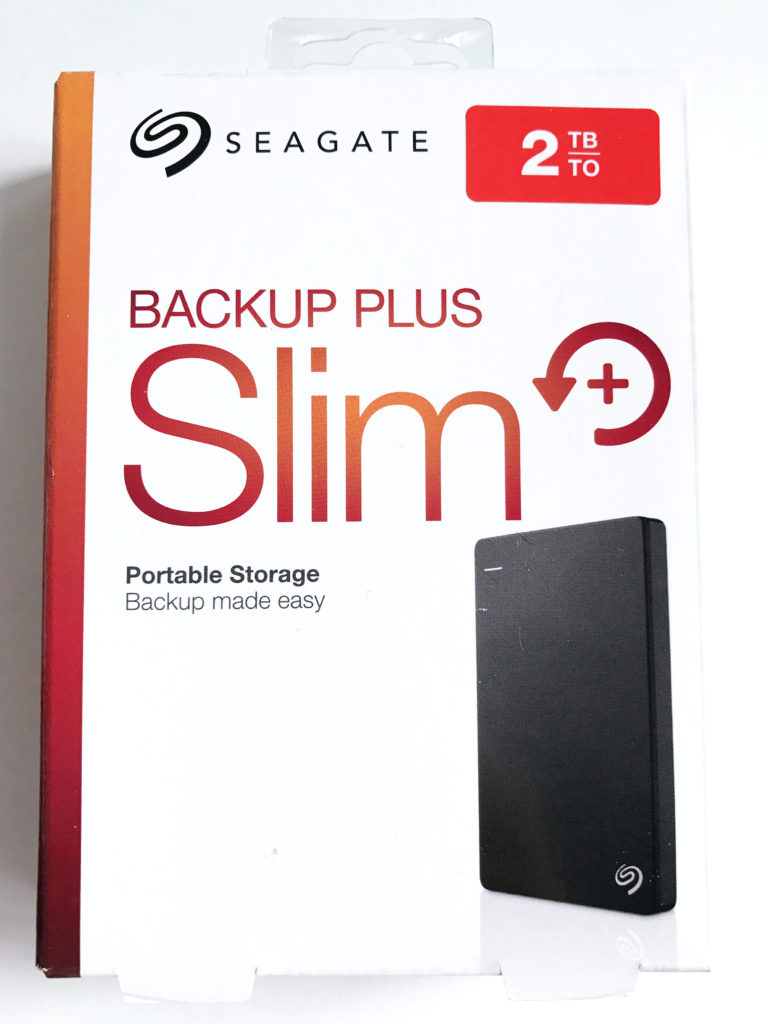 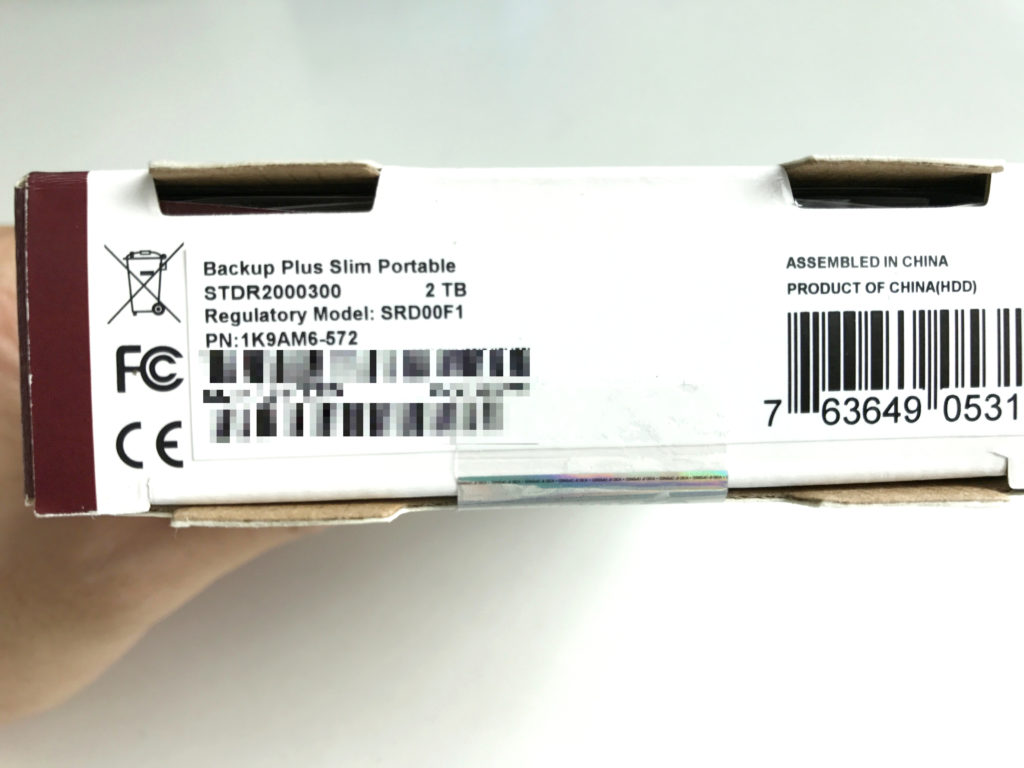 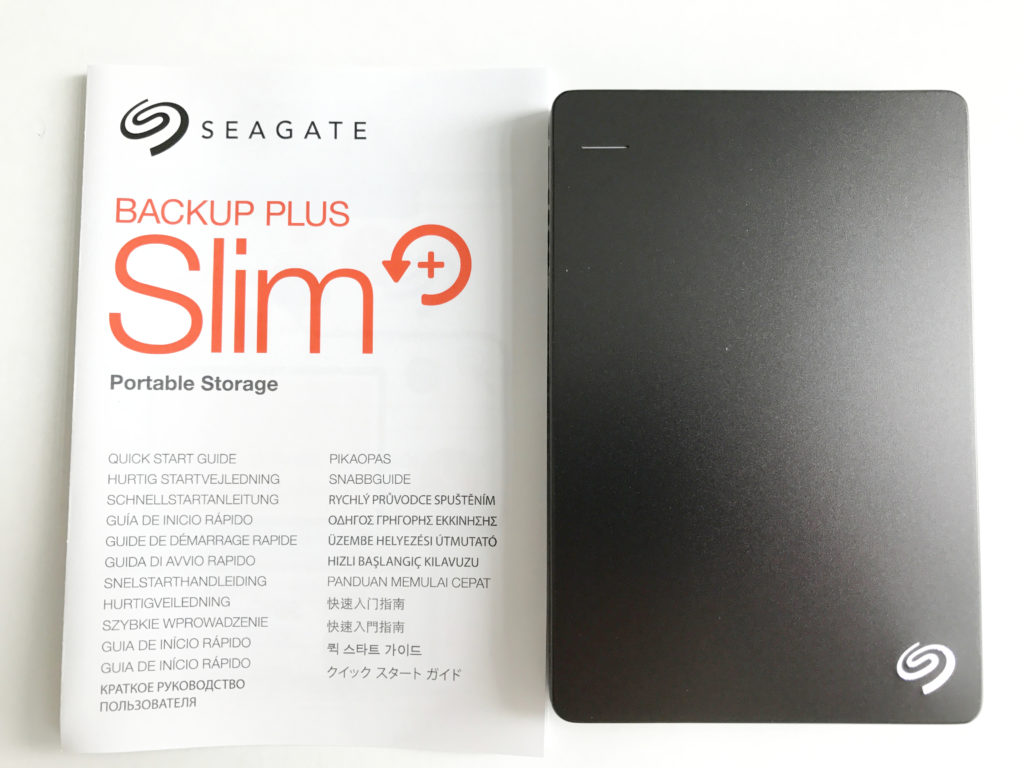 All you actually need is a simple flat head screwdriver that’s thin at the edge. The one I used for my hack was the TEKTON 2830 Everybit (TM) Precision Bit and Driver Kit for Electronic and Precision Devices, 27-Piece

(see image below). But you can just use any screwdriver set that you may already have. 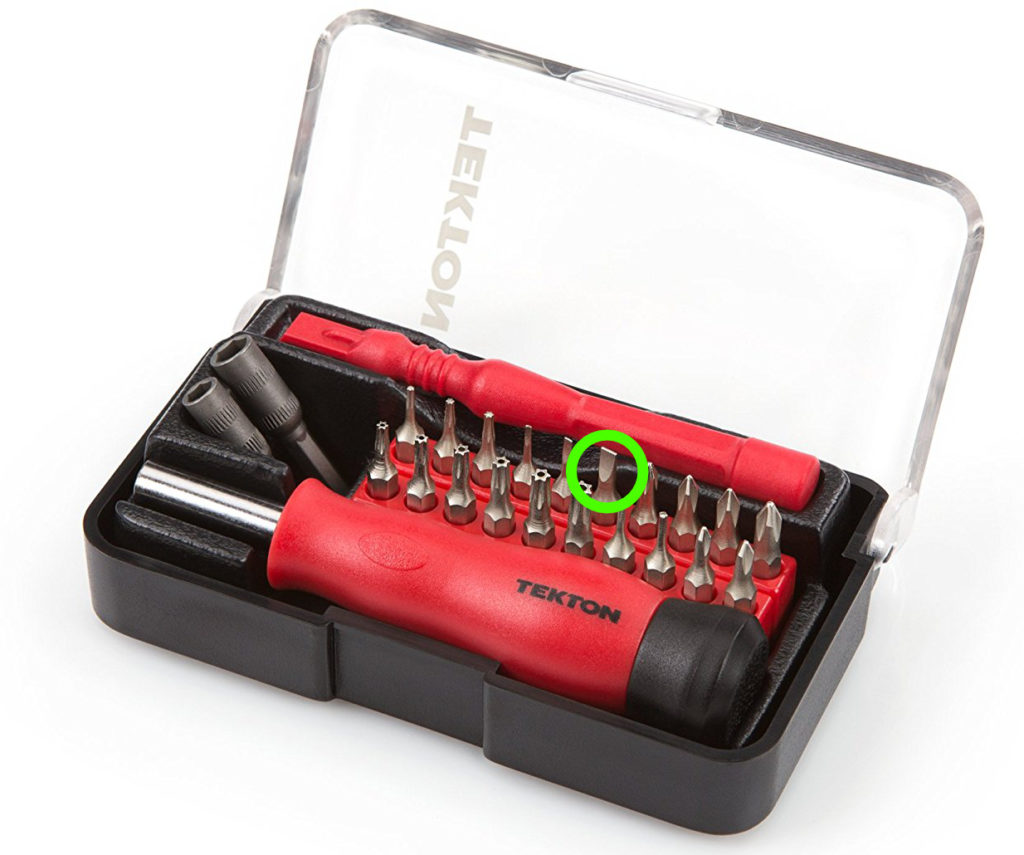 All you need to do is to just pry open the top case of the Seagate Backup Plus Slim 2TB Portable External Hard Drive at the points as seen in the photo below. 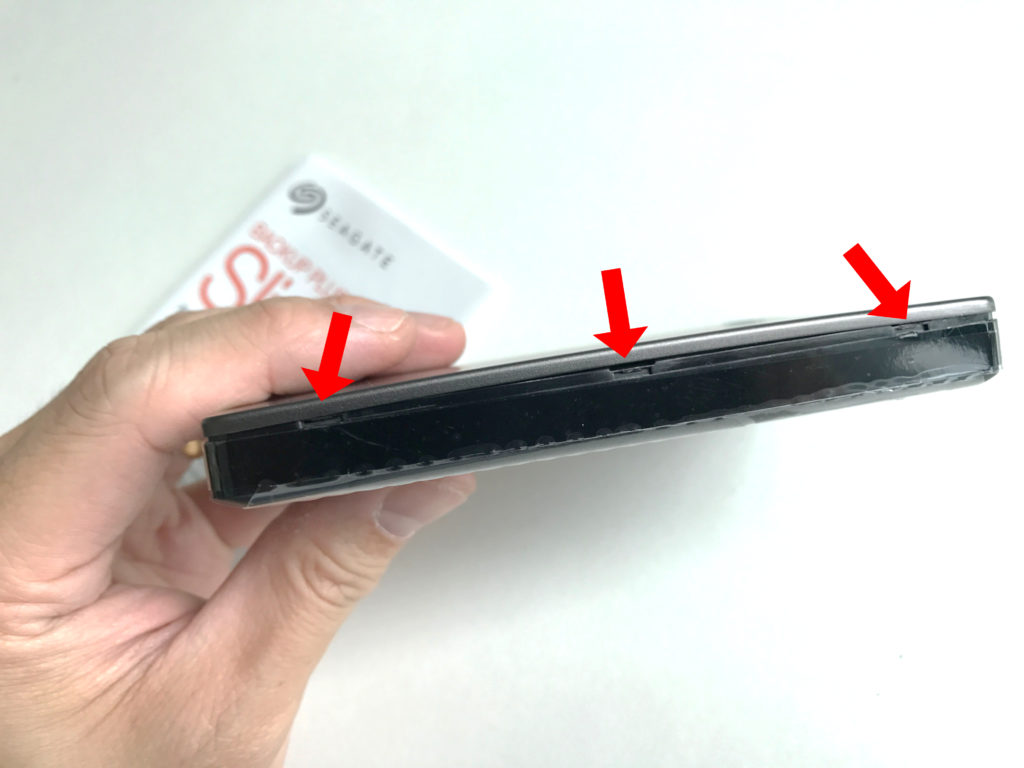 Once you’ve pried off the top case from the bottom on one side, you can actually just gently rip off the entire top case of the Seagate Backup Plus Slim 2TB Portable External Hard Drive. I didn’t need to try to pry the case off from any of the other sides. 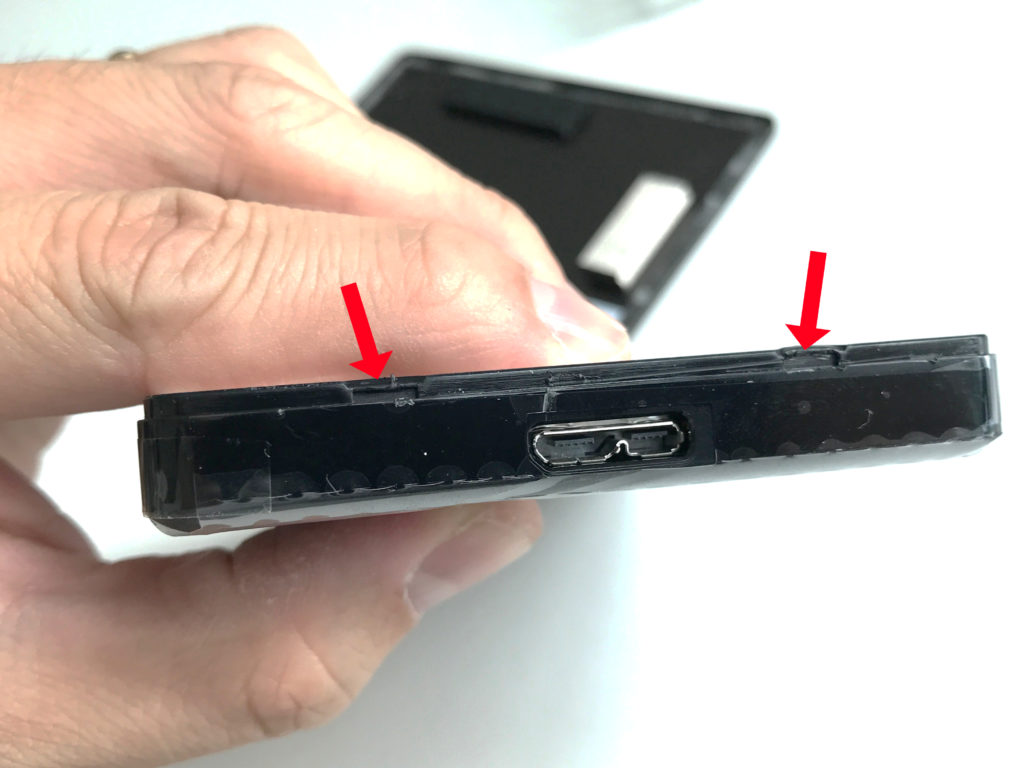 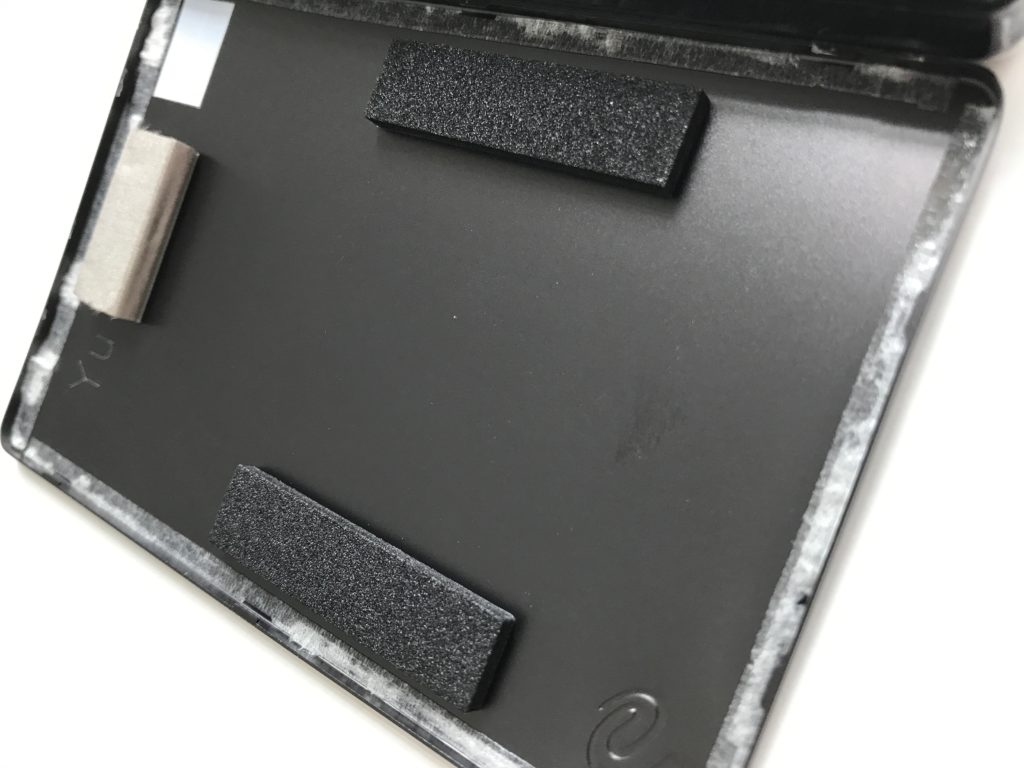 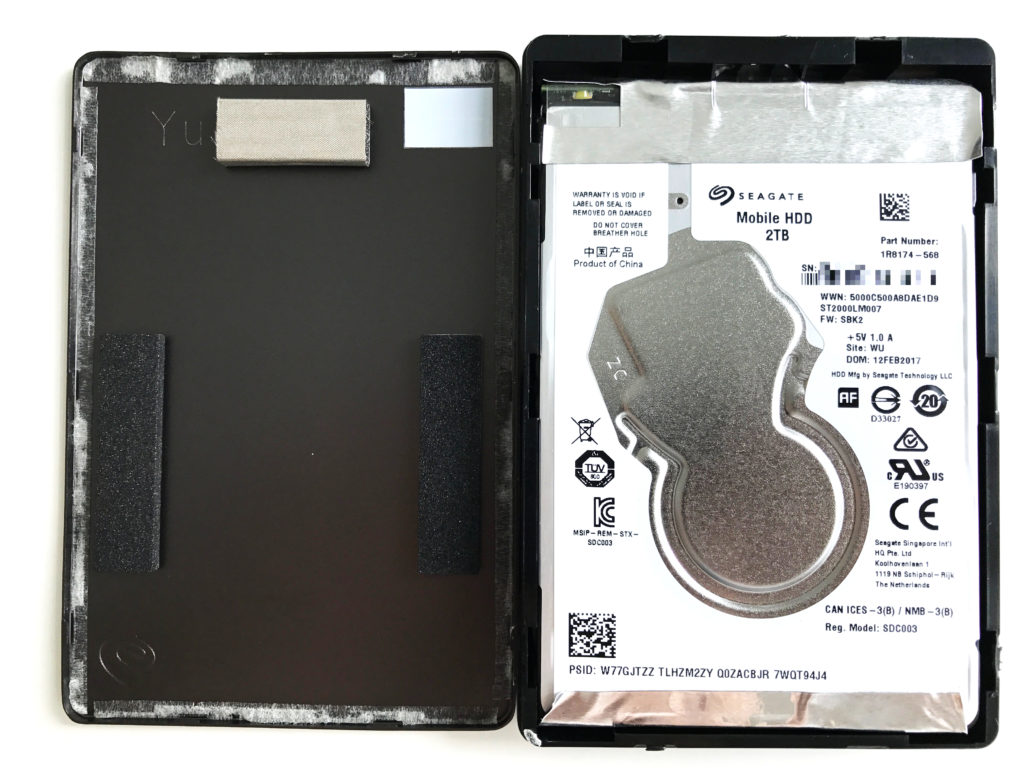 Top case removed from the Seagate Backup Plus Slim

With the top case removed, you should find a 2TB Seagate ST2000LM007 Mobile HDD. If you’re interested to find out more about this drive, you can find the product data sheet here from Seagate’s website.

Getting the Seagate Mobile HDD 2TB out 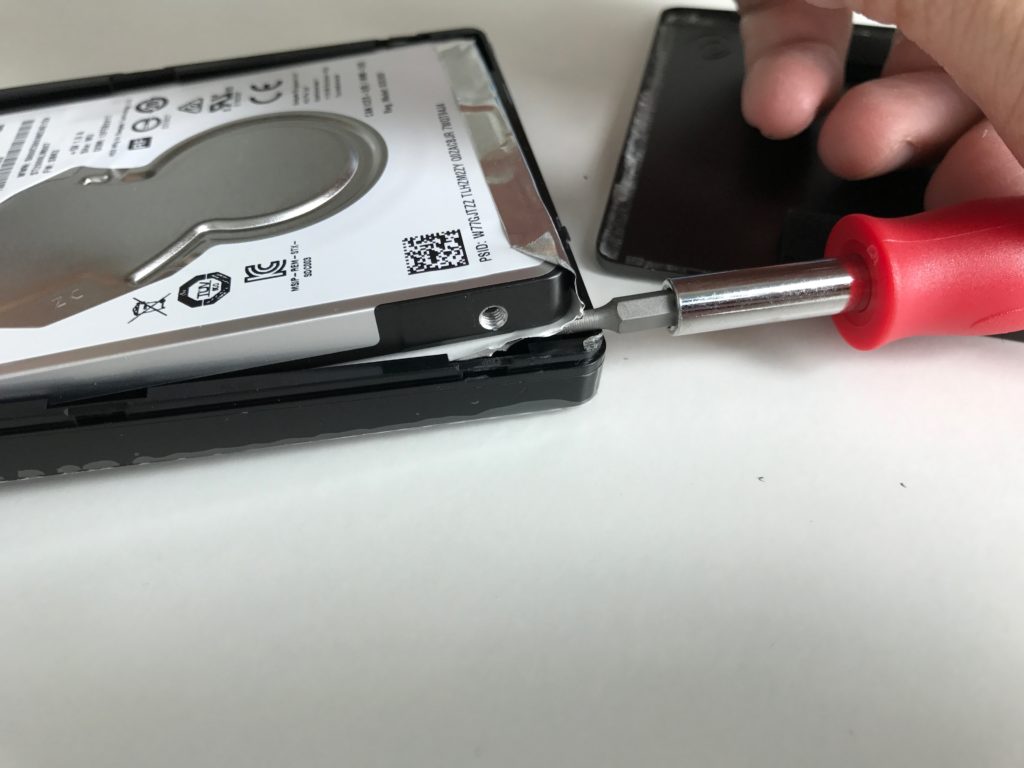 Lifting the mobile HDD out of the case 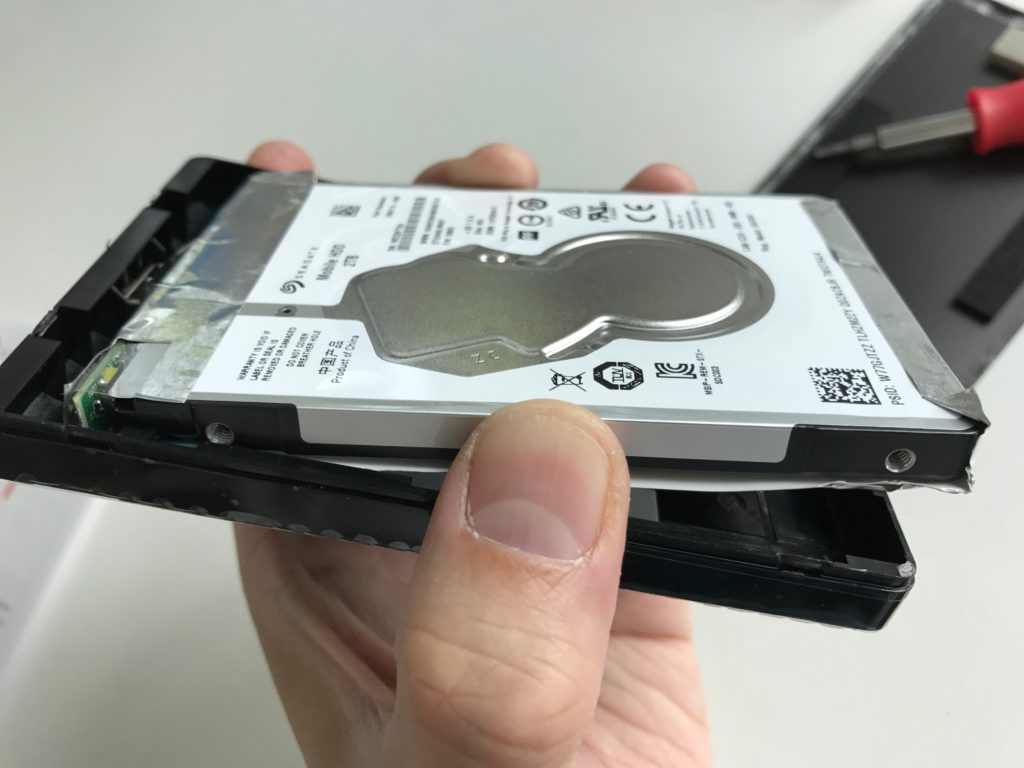 Taking out the mobile hard drive from the casing 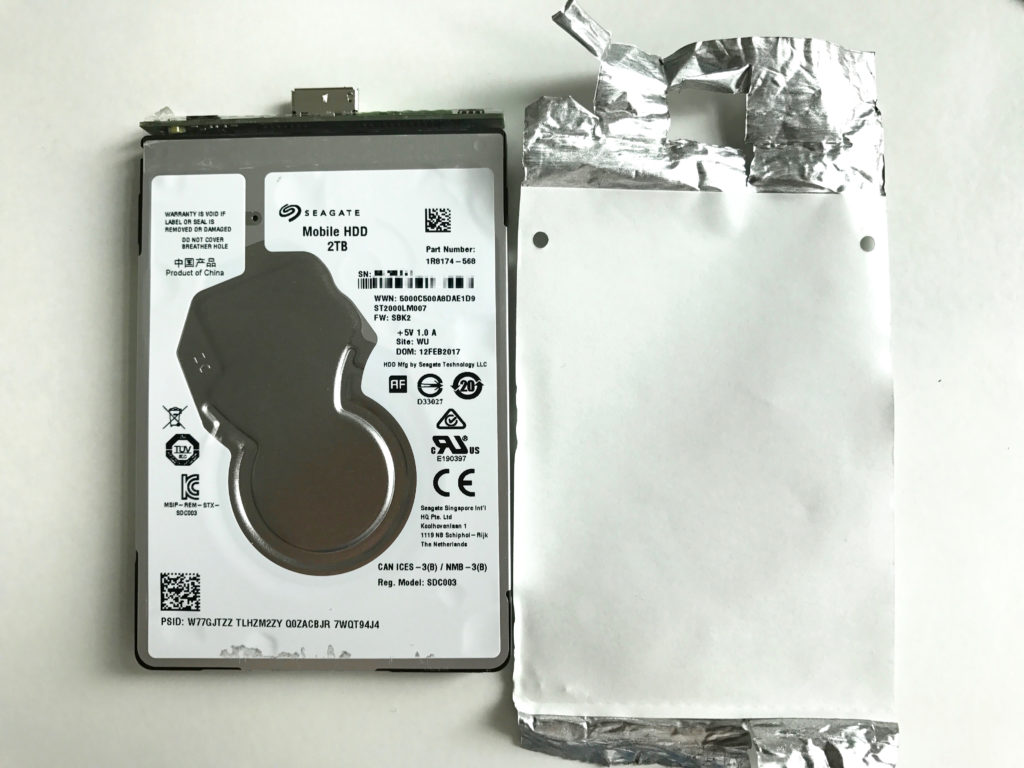 Peeling off the metallic sheet protecting the hard drive

After that, the last item to remove is the SATA to USB adapter. You will notice that it is kept in place with a transparent but sturdy tape. Again, gently peel it off the mobile hard drive. 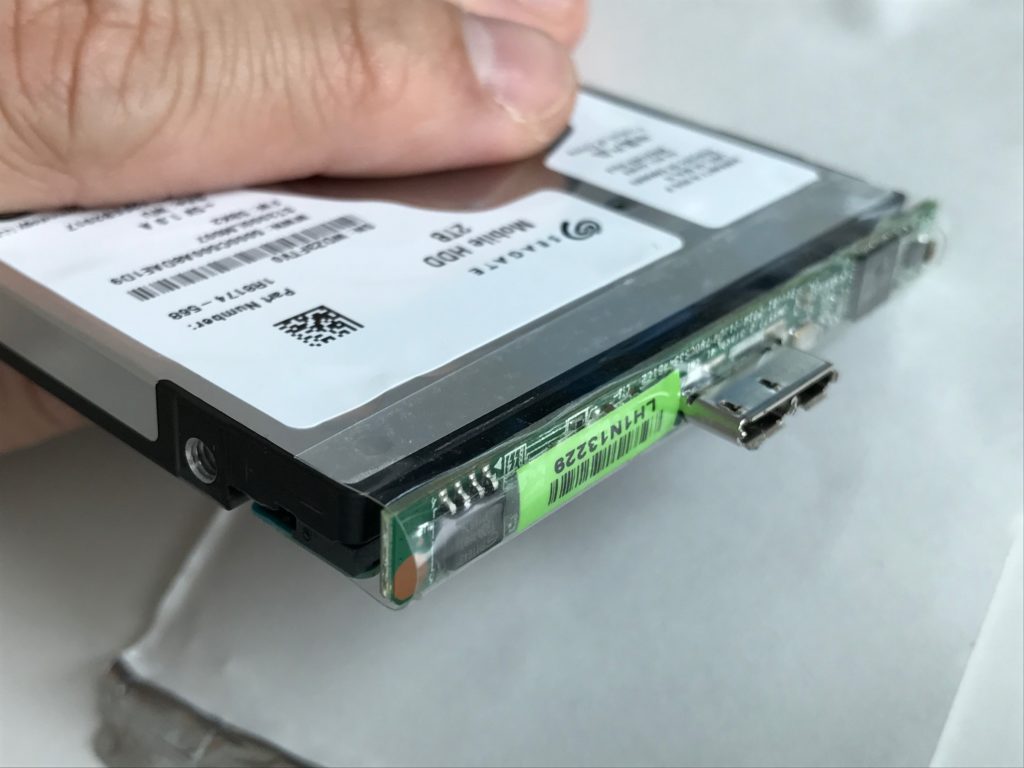 The SATA to USB adapter on the Seagate mobile hard drive 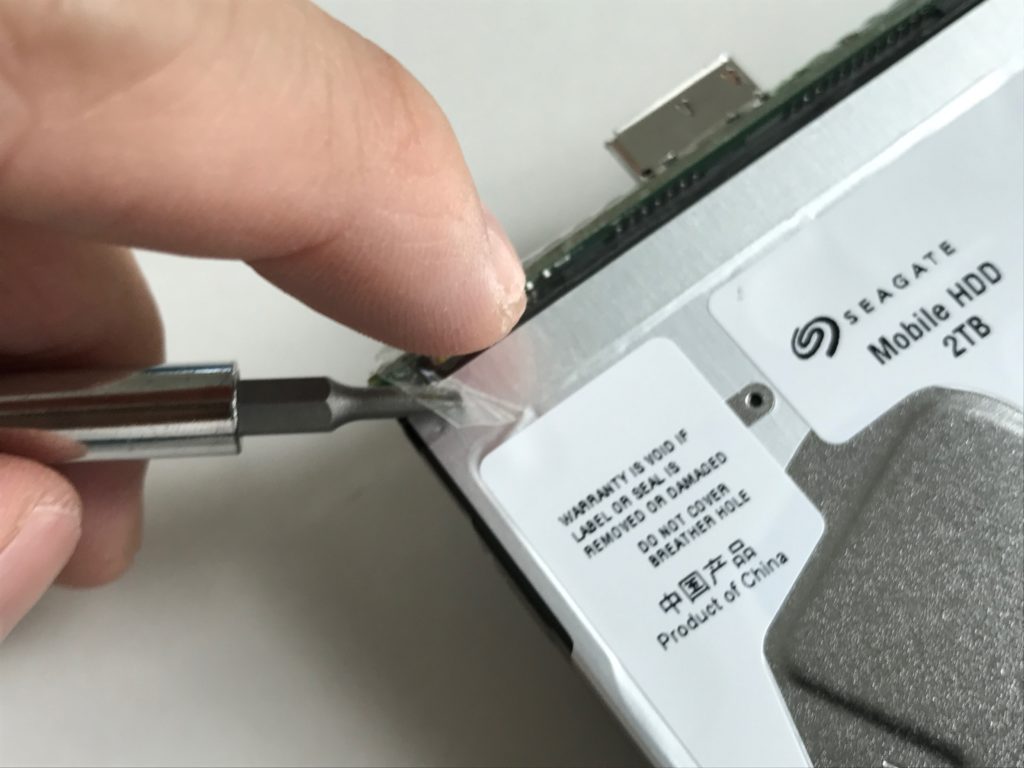 Carefully peel off the tape over the adapter 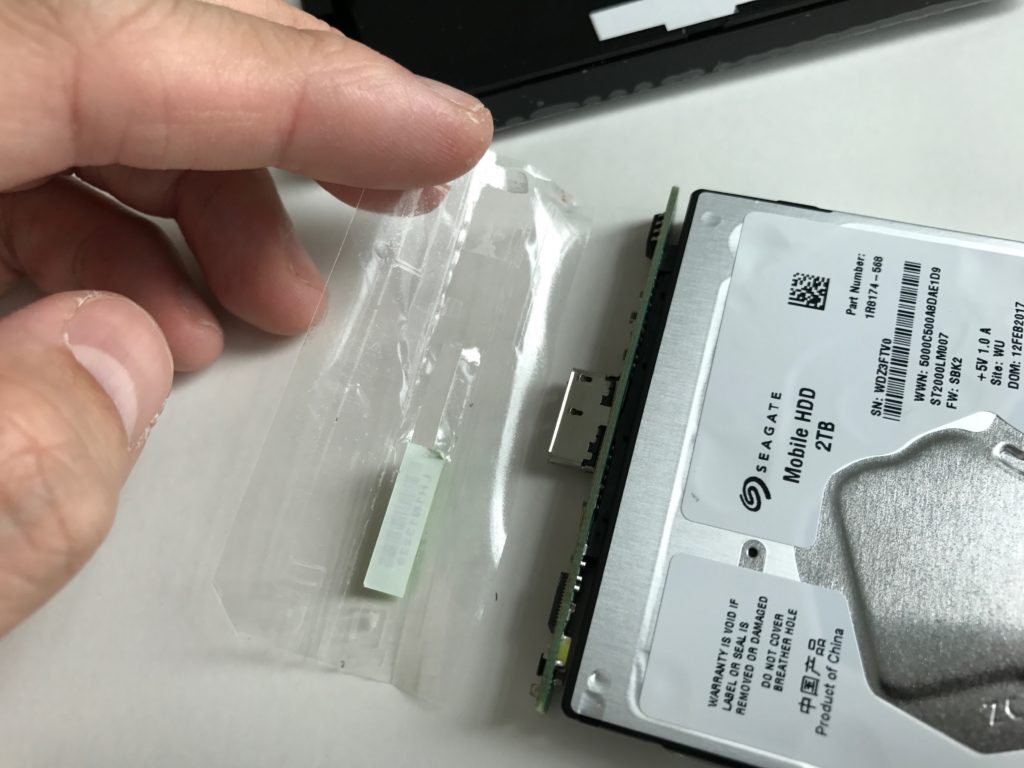 Now for the final step, detach the SATA to USB adapter by gently pulling it away from the hard drive. You can see how it’s attached to the hard drive in the photo below. 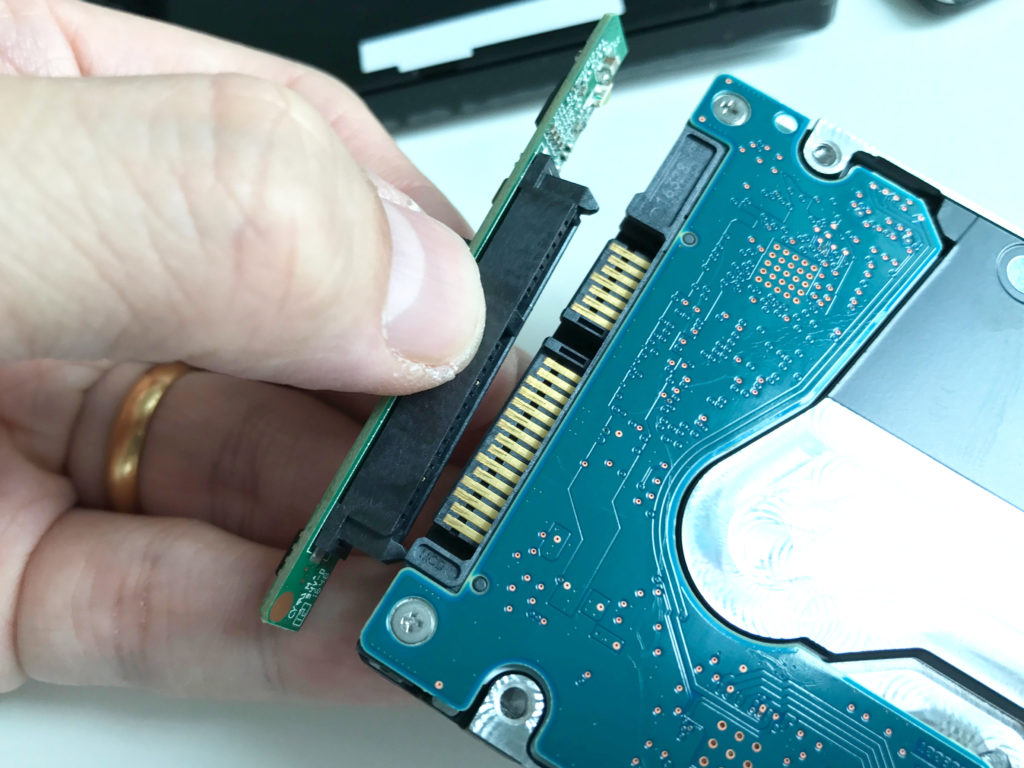 And that’s how you have a 2TB mobile HDD for the Intel NUC. 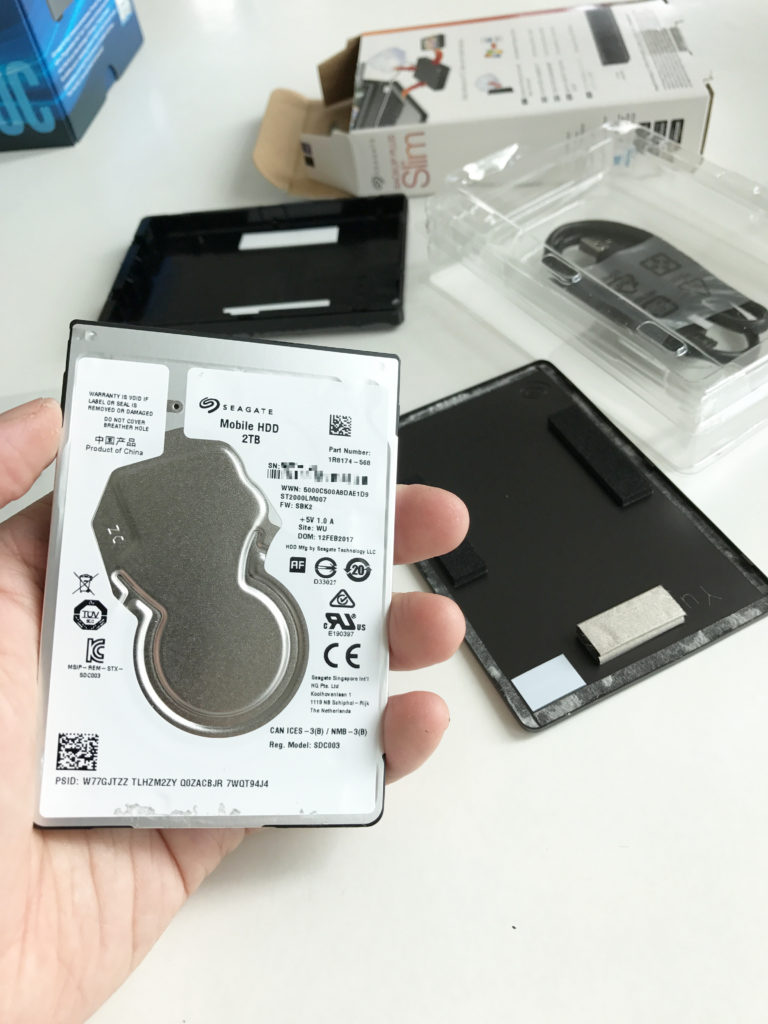 The Seagate mobile HDD removed from the casing

Now, all you need to do is to simply open up the NUC and install the 2TB Mobile Hard Drive into it. 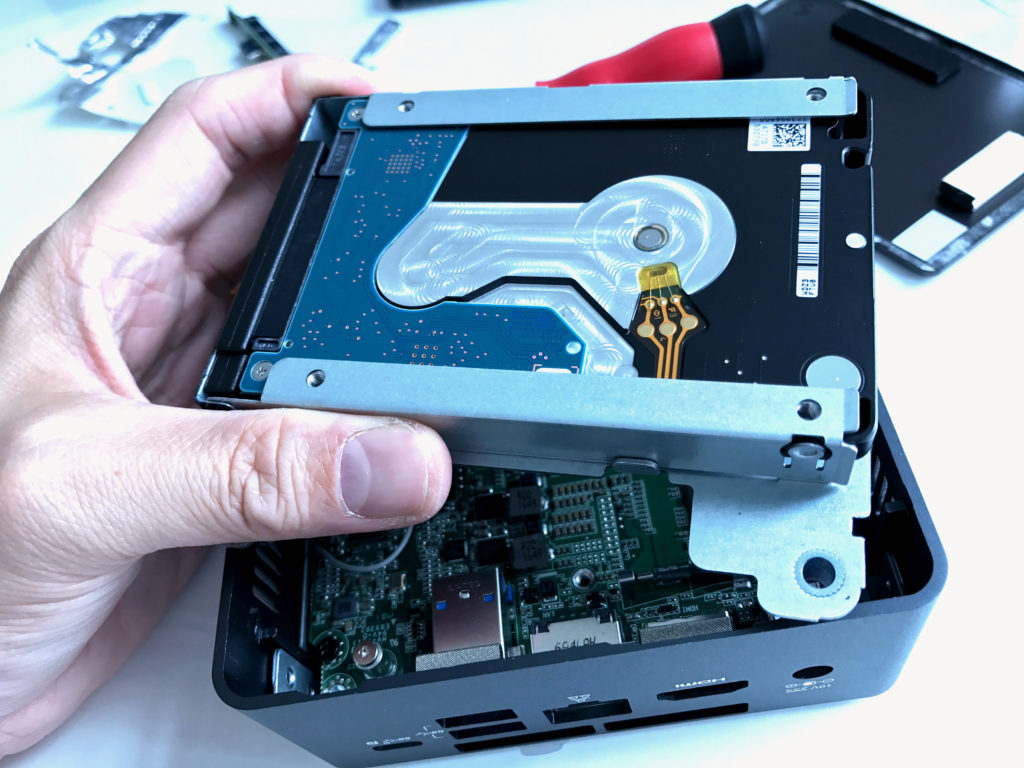 Fitting the HDD in the Intel NUC 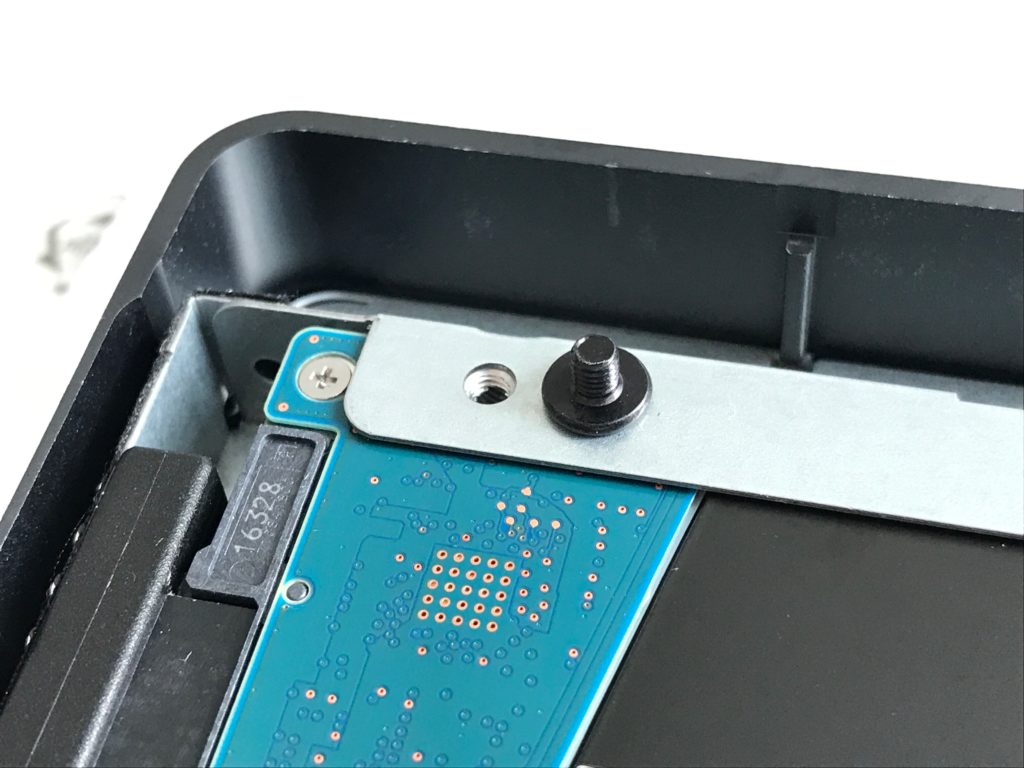 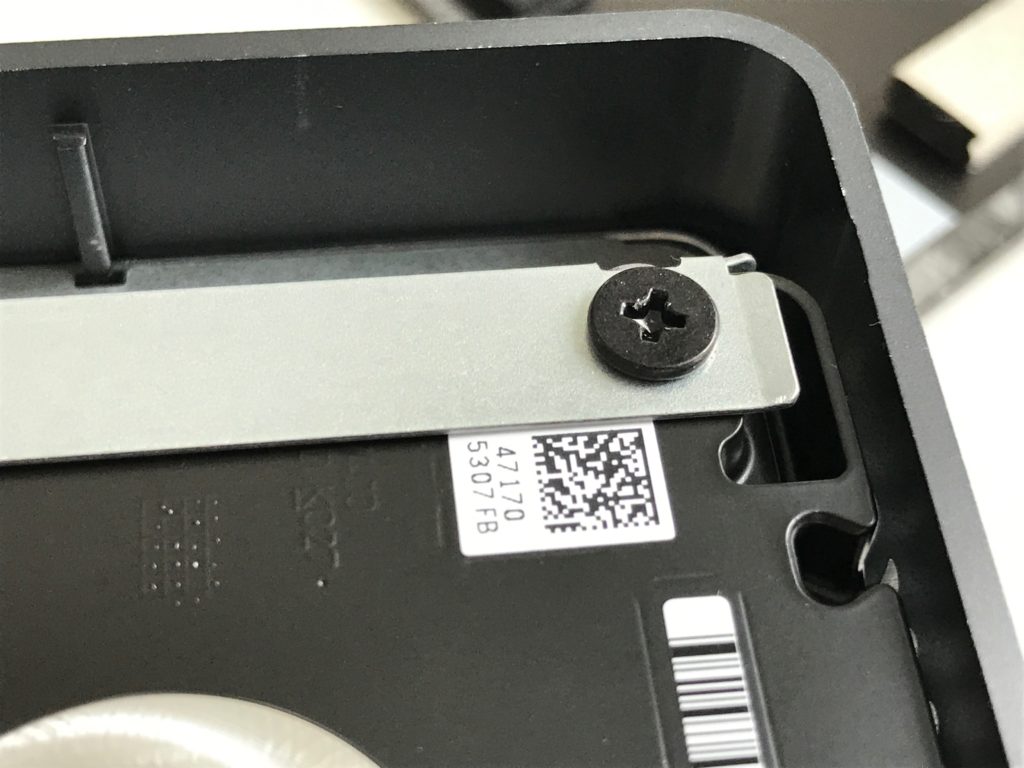 And that’s is how you get yourself a 2TB mobile HDD when you can’t find it sold as-is.

Tip me with a latte