If you just gotten a 802.11n wireless router to upgrade your existing 802.11g router, I bet that you would be wondering how you should set it up to ensure co-existance with older devices and still get the benefits of the much faster 802.11n speeds. Let’s face it, you (and I too) would like to go exclusively 802.11n with it’s 5GHz channels that is much less saturated compared to the over congested 2.4GHz channels that 802.11g uses. However, it’s likely that you have a bunch of 802.11g devices that needs to connect to the network as well. And not to also mention 802.11n that only supports 2.4GHz channels (such as the iPhone 4).

Here’s the catch, if you run your 802.11n router on 2.4GHz channels, chances are you won’t be getting the best speeds that it can potentially offer you. Also, if you configure the router to run the mixed-mode, both 802.11g and 802.11n, and if you have 802.11g devices connected to the router, then speeds will drop to 802.11g speeds as well in most cases.

So, if co-existing both 802.11g and 802.11n is such a pain, why bother getting the upgrade in the first place! There MUST be a way to get both of them to play nicely right? Yes. There are indeed 2 ways to do so.

One, get a router that supports simultaneous 2.4GHz and 5GHz channels. If you got one of these. Then make sure you set it up to run both channels simultaneously if it’s not already set to do so. Only one problem, these routers are quite expensive! And if you are like me, you’d rather spend the extra dollars elsewhere.

So on to the second option then!

As for me, the second option is exactly what I’ve done for my home wireless network, using the Linksys WRT54G and Linksys WRT320N wireless routers. It also helps that both routers supports the 3rd party DD-WRT firmware that has a whole lot more options to configure and tweak these routers.

I’d share my setup below based on the configurations of the two routers mentioned above but you should be able to get the idea how the setup is done. 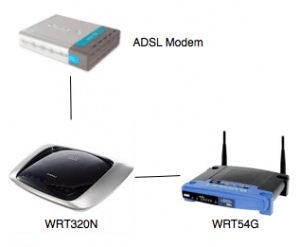 In a nutshell, the wireless routers are setup as per the diagram on the right. Since the WRT320N is suppose to be the primary wireless router, I decided to set it up as the ‘heart’ of my home network, acting as the gateway for Internet connections as well as all the necessary network services, such as DHCP, Firewall, and etc.

With DD-WRT, there are a few key configurations that you will need to make sure you set up on the 802.11n wireless router to ensure that you get the full speed.

BTW, I’m currently using the latest stable release (as of this writing) which is DD-WRT v24-sp2.

On the WRT320N, setup the required settings for your Internet (WAN) connection as usual and make sure DHCP Server is enabled. You may set the IP ranges to your fancy, or just use the default 192.168.1.x ranges.

Now, here’s the tricky part for 802.11n. Firstly, let’s make sure it runs only on the 5GHz channels. In order to do that, you need to head over to the Wireless settings tab and make sure the following are set. 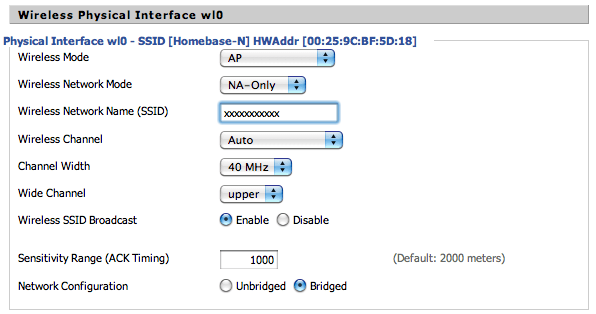 It’s important to note that the in order to limit the wireless channels to the 5GHz band, NA-only mode is required to be used. I decided to allow the wireless router to automatically set the channels as it sees fit since there’s no nearby router using the 5GHz range. (Yay to no interference!) You’d also want to set the Channel Width to 40MHz to get maximum channel bandwidth, especially since not many uses the 5GHz band.

Now that you’ve set the 802.11n router to run exclusively on the 5GHz channel, next, let’s make sure the router is set with the only security setting that 802.11n requires in order to get full speeds. Yup. It has to be ONLY on WPA2 + AES security. Anything else would mean NOT getting the promised 802.11n speeds of (potentially) up to 300Mbps.

With that set, you pretty much is done with what’s required for 802.11n. Do of course, configure the rest of the router to your fancy as well, especially so if you are also using the DD-WRT firmware.

Next, let’s setup the WRT54G (or your 802.11g router) so that it would allow any devices connected to it to also join the network and get Internet connections.

Also, let’s make sure the WAN setup is also disabled since it’s not required to connect to any WAN network (unless you have such a need, but let’s not complicated matters here.)

To keep things simple, let’s make sure the 802.11g devices joins the network using the same DHCP server as the 802.11n devices so there will not be any IP conflicts. All you need to do is set-up the WRT54G’s DHCP Type as a DHCP Forwarder and point it to the WRT320N router’s IP address.

Next, you would also want to make sure that the WRT54G routing tables are in-sync with the WRT320N which is acting as the network’s gateway. To do so, go into the Advanced Routing tab under Setup and make sure Router mode is selected.

For the wireless settings, just set it as your liking. For me, I decided to keep it only on 802.11g mode since I don’t have any old 802.11b devices anymore. But make sure the SSID is different from the 802.11n router so you can recognize between the two. Also, make sure an unused channel is used to avoid interferences. To do this, simple use a WiFi scanner and see all the available WiFi access points around your area and choose the channel that’s not used. DD-WRT comes equip with a WiFi scanner in the Status -> Wireless tab -> Site Survey tool.

As for the 802.11g wireless security settings, you may set the same as the 802.11n router to keep things easy to remember or anything at all. I’d still recommend using WPA2 as it’s much more secure compared to WEP security.

And that’s it! Now you have two routers running both 5GHz and 2.4GHz channels simultaneously (sort of) to ensure maximum speeds and compatibility. Except perhaps for 802.11n devices that only runs on 2.4GHz like the iPhone 4, which would then need to connect to the 802.11g network. But then again, why would you need such fast local network speeds if you don’t transfer large (in gigabytes) files to/from you iPhone 4?