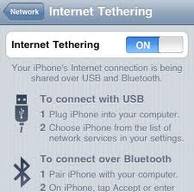 Recently, my iPhone’s ability to wirelessly tether the Internet connection from my mobile data plan through bluetooth was broken. I wasn’t sure what went wrong or what broke it. All I did right before it happened was to upgrade my RAM from 4GB to 8GB and also the hard disk to a nice 7200RPM 500GB Western Digital Scropio. And the guy that helped me upgrade it did a PRAM reset as well.

But anyways, it just go screwed up. It would still pair with my MacBook Pro and I could also see the blue Internet tethering bar appear everytime i connect my iPhone from the Bluetooth device list. What’s not working was that I just wasn’t able to get online and nothing loads on my Mac.

And since USB tethering works, I suppose it’s got something to do with my Bluetooth connection. The PAN setup in particular.

So I went about trying to fix it and lo-and-behold, it was SOOoooooo easy to fix it. Here’s what I did.

I suppose the fact that I was able to connect to my iPhone via Bluetooth and still not get connected should have hinted me enough what the problem was. 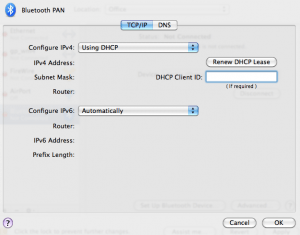 Initially I didn’t think there was an issue with the PAN network and thus tried to figure out what was wrong with the ever ‘stable’ Bluetooth pairing. So, I quickly remove the iPhone from the Bluetooth devices and vice-versa on the iPhone as well, and re-pair them fresh.

That obviously didn’t solve my problem.

Then I did a little more checking and went into the network settings of the Bluetooth PAN. Hey, what happened to my IP address. It seems that the problem is that it’s not being assigned by via DHCP! And all I needed to do was the renew the lease

But it seems that merely trying to renew the DHCP lease don’t quite work too.

For some reason, it worked before but there were times when it didn’t work again.

So to make sure that it was all re-setup nice and well. I decided to clear off the pairing again. Made sure all the settings were removed from both the MacBook Pro and the iPhone, the device pairing configurations as well as the Bluetooth PAN configuration.

The steps I took which is now fool proof are as the following:-

On the Mac, just go to the Bluetooth Preferences and remove your iPhone from the list of devices.

On the iPhone, similarly, just access the Bluetooth settings and ‘Forget’ the bluetooth device which in this case would be your Mac.

In my case, I turned my iPhone off and on just to make sure the settings is really removed. I doubt this is really necessary but heck, I just did it anyway.

Now, don’t re-pair your iPhone back to your Mac just yet. There’s one more configuration to remove and that’s the Bluetooth PAN config.

Next, open your Network Preferences and look into the list of network services. You should find one called Bluetooth PAN. Remove it by clicking on the ‘-‘ (minus) button at the bottom of the list. Don’t worry about removing it. Adding it back is a breeze. 🙂

This is pretty simple. On your iPhone, go into the Bluetooth settings to allow the iPhone to be discoverable and re-pair it again with your Mac. This step should be fairly simple and if you’re stuck, well, here’s a link to how you can pair your bluetooth device to your Mac.

Now that you’re re-paired it, the next step is to re-create the Bluetooth PAN configuration. But before that, just make sure that your iPhone Internet tethering is still on. And if paired, you should see the blue tethering bar too. No, your Mac would still not connect to the Internet yet at this point as the Bluetooth PAN configuration does not yet exist. 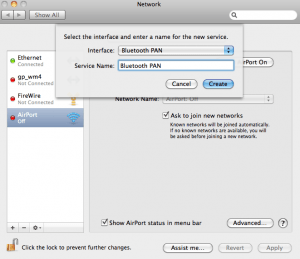 Now get back into the Network Preferences. To add it back, just click on the ‘+’ (plus) button just beside the ‘-‘ (minus) button to add a new services.

Once you’re happy with the interface name, just click Create and you’re almost there!

You’ll notice that once you’ve recreate the Bluetooth PAN, it would state itself as connected but with a yellow dot notifying you that the connection does not have an IP.

So all you’ve got to do now is to just select the Bluetooth PAN interface and click on the “Advanced…” button. Once you get into the TCP/IP settings, just click on the Renew DHCP Lease button and you’ll get the IP address assigned to you again!

Once this is done. The next time you try and connect your iPhone network again, it would work without a hitch anymore.

A note of caution. If you have a few network locations configured, you would need to delete and re-create the Bluetooth PAN configuration for each of the network locations since the interface settings are unique to each location.